The second room of the museum is divided in two different sections: in the first one there is the continuation of the chronological itinerary in the Ortonese figurative art from  the 18th century paintings by Giambattista Gamba, dedicated to Saint Catherine of Alexandria’s life, to the two pieces portraying Saint Augustine and Saint Girolamo made in 1865 by Ferdinando Palmerio, born in Guardiagrele in 1834 and died in 1916, going through the painting titled L’incredulità di San Tommaso by Giuseppe Lamberti ,1731.

Lamberti’s work represents a point of contact with the second section hosted under the broad vaulted space datable to 1330, where we can find instead those works that better represent the history of Ortonese Diocese and those objects connected to the Liturgical functions in the Cathedral and to the veneration of the Apostle Thomas starting with the baptismal font made of stone, perfectly conserved, created for Mons. Giandomenico Rebiba, first Bishop of Ortona from 1570 to 1596. From the period of his successor, Alessandro Boccabarili, coming from a noble family in Piacenza and formerly Chamberlain of Margaret of Austria,  we have many pieces that make the sector of silver important with a precious chalice from 1608, a refined incense burner and a large basil with his emblems that, unusually in the diocesan area of interest, shows the seals of a Venetian silversmith. Samples of the following centuries that escaped the requisitions of the end of 18th century and the horrors of the was, are instead many other valuable objects among which the Altar cross made by the Neapolitan silversmith Filippo del Giudice in 1756. 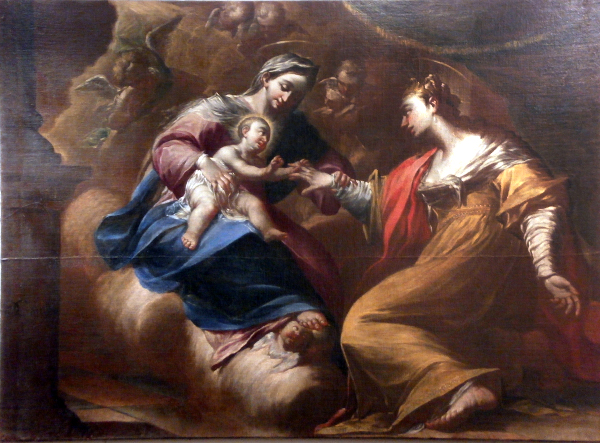 Download the audioguide
The four paintings showing episodes of Saint Catherine’s life have been referred to the painter Gianbattista Gamba who, in the first half of 18th century decorated many churches in Abruzzo as Santa Caterina d'Alessandria Church and the Annunziata in Sulmona where in 1728 he signed the wall paintings, Santa  Maria del Colle in Pescocostanzo, and the  Santissima Trinità in Popoli,

The scene portrayed in the painting actually refers, with an evident overlapping, to an episode of Saint Catherine from Siena’s life, lived in the 14th century who, on the night of carnival of 1347 had an apparition of Christ the Child, with the Virgin and a crowd of Saints, who gave her a ring as symbol of the mystical marriage. 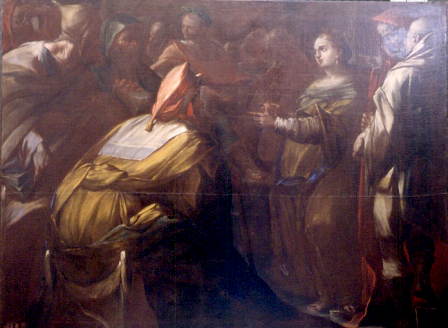 Download the audioguide
Among the rather fantastic episodes of Saint Catherine’s life, who must have lived in the 4th century, there is a main one datable to 305 A.D., according to which in occasion of  Massimino Daia’s designation to Governor of Egypt and Syria they organised great celebrations which also included the sacrifice of animals to pagan divinities by all the subjects. Catherine, being Christian, refused to offer sacrifices to false divinities and went to Massimino inviting him to recognize Jesus Christ. Thus, Massimino summoned up a group of Alexandrian scholar to convince the Saint to worship the Olympus Gods but the meeting ended up in the scholars’ conversion to the new faith. 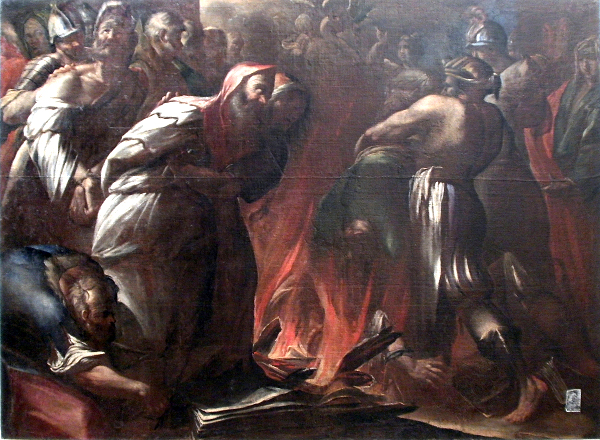 Download the audioguide
Disappointed by the scholars’ conversion, Massimino gave the order to kill them, as can be actually seen in the scene portrayed in the painting. Subsequently he would propose Catherine to marry him but, since she refused, he sentenced her to a terrible death, with a wheel that would tear her flash apart.

Miraculously the wheel went to pieces and the young Catherine underwent the martyrdom of decapitation. The angels then moved her body to Alessandria up to Mount Sinai where the high ground near Gebel muse, Moses’ mountain, is still called Gebel Katherin in her memory.

Download the audioguide
According to what the tradition about Saint Catherine of Alessandria  has passed on, it’s difficult to distinguish historical reality from popular legends so that the same Catholic Church has had doubts about is and, between 1962 and 2002, she was excluded from the martyrology, notwithstanding the Vatican’s permission to keep celebrating her memory day.

The scene of the painting seems to take place in a dark prison where, according to a legend, the Saint was locked in and kept before the martyrdom for a long time without anything to eat or drink, but a white dove would fly to her, bringing what she needed, so that when she was freed she showed no signs of suffering even if she is portrayed while receiving a crown from the hands of an angel.

2.5 Giuseppe Lamberti , The incredulity of Saint Thomas, 1731, oil on canvas coming from the Cathedral. 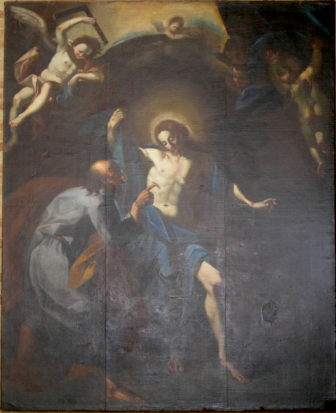 Download the audioguide
The piece was commissioned to the painter Giuseppe Lamberti , born in  Ferrara around 1700 and died in  1763, by the City of Ortona as ex-voto for the avoided plague of 1731.

We have only few works referred to this painter, who worked in Abruzzo and painted works placed in the churches of Guardiagrele, Penne and Lanciano where there is a painting coming from the cathedral and portraying the Coronation of the Virgin. The scene represents the moment the Apostle Thomas’ finger lightly touches the wounds of Christ Resurrected. According to a tradition in Abruzzo, handed down by Gennaro Finamore, Thomas the Apostle was blind and this is why he needed to touch the body of the Saviour, in order to be able to recognise him.

Download the audioguide
The piece, generally referred to the Venetian workshop of Lombardos, a family of remarkable silversmiths, portrays the arrival of Saint Thomas’ relics on the island of Scio, where they were taken by the navarch Leone ( later called Acciaiuoli), together with the gravestone testifying to their authenticity, and brought to Ortona, his hometown, in 1258. It was part of the ark that kept Saint Thomas‘ relics after the profanation of the church led by Turks in 1566 when, according to the chronicles of that period, the holy case was destroyed but miraculously its content wasn’t damaged in any way. 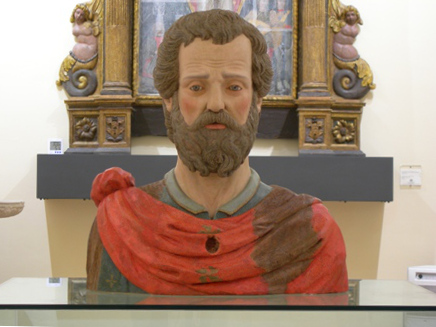 The wooden bust of the Saint Patron is among the objects that better testify to the devotion he was made object of over the centuries. It was carved in 1799 after the French invasion and, the following year,  was used as model for the fusion of the wonderful silver reliquary bust made by a Neapolitan silversmith that substituted the former one of the 18th century, that had been stolen and melted together with the large emerald cross that decorated its breast. 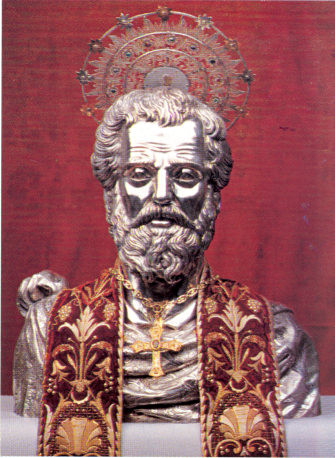 Tweet
More in this category: « FIRST ROOM Chapel of the Rosary THIRD ROOM »