In this last room of the museum drawn from the Chapel dedicated to Saint Onuphius, formerly private chapel of De Sanctis family as shown by the two funeral monuments still in the room, there are a lot of testimonies to centuries of Ortonese History, archaeological finds of the Roman period and stone elements of the old Cathedral, together with an extraordinary numismatics collection. 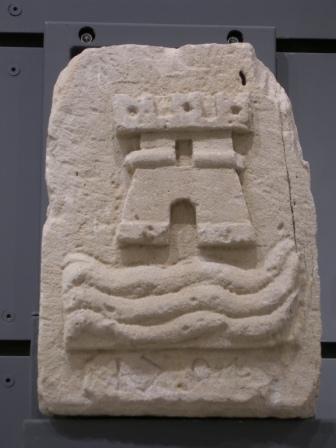 Download the audioguide
The emblem of Ortona City shows a tower, a bit different in this sample from the most  popular one that in heraldic terms has been described as  “al castello triturrito di rosso merlato alla guelfa e chiuso d'argento sul mare d'azzurro”. Anyway, the reference to the fortified town and to the castle dominating the port that was the most important one in Abruzzo and a fundamental  port of call for the Venetian sea trades, is evident. 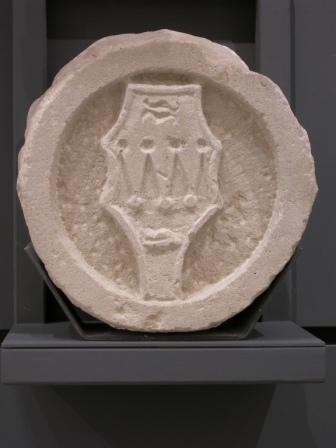 Download the audioguide
In heraldry de Pizzis’ emblem is described as ‘troncato, inchiavato, pomato di quattro pezzi d'oro e di rosso, caricato di quattro gioghi posti in fascia, due in capo di rosso e due in punta d'oro’. The forefather of this very famous Ortonese family was Ruggero, mentioned in a commemorative stone as Ruler of Ortona in 1251.

Around half of 17th century he got a lot of feuds : S. Martino, Filetto, Vacri, Rosciano and Guardiagrele,  but he later kept only the ones in S. Martino and Filetto. In 1708 the title on S. Martino was upgraded from Baron’s to Marquise’s.  They were the heirs of the painter Giovan Battista Spinelli since his sister Catherine had married Ludovico de Pizzis bringing him a dowry of almost 3000 ducats.

Even if numerous and divided in many branches, De Pizzis family extinguished at the end of the 18th century with Antonia, who married Francesco Odoardo Benedetti, baron of Scoppito e aristocrat from L’Aquila,  at the end of 18th century.

The title of Marquise of di S. Martino passed to his son Giuseppe Benedetti, who settled in Ortona and had no progeny. His wife and he were the last ones to be buried in the 14th century family crypt of Immacolata Concezione in  the Ortona Cathedral. 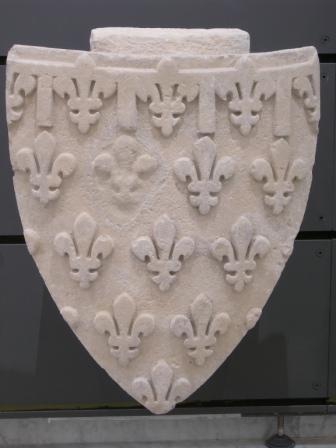 Download the audioguide
During the Angevin period in Ortona, a particular importance was gained by Riccardi family who were as faithful to the French monarchs as the powerful Ricci family in Lanciano was faithful to Aragoneses, and this ended up in making even worse the relations between the two Frentano cities, which were already very tense for commercial reasons. Saint John from Capestrano ‘s intervention  put an end, even if just temporary, to the disputes and fights between the inhabitants of the two cities: in fact on 17th February 1427 he obtained the two enemies to underwrite a peace agreement  written by Cicco di Memmo of Rosato, notary in  Ortona, and declared on the tomb of the Apostle Thomas.

In memory of the event, in Ortona, the Madonna delle Grazie convent was started, currently no more existing, while in Lanciano the convent of Sant’Angelo della Pace, currently San Antonio, was founded; it still exists with its very rich library.

With the final victory of Aragoneses in the Kingdom of Naples, Riccardis were forced to exile and they moved to Urbino, Pesaro, Modena, Mantova and Bologna. Some remarkable names of those years are Francesco Riccardi, who was also Governor and Viceroy of Perugia between 1408 and 1414, and  Sigismondo Riccardi, Lord of Caprara, known as "Morello da Ortona", friend of Pietro Bembo, and mentioned in “Cortegiano" by Baldassarre Castiglione. 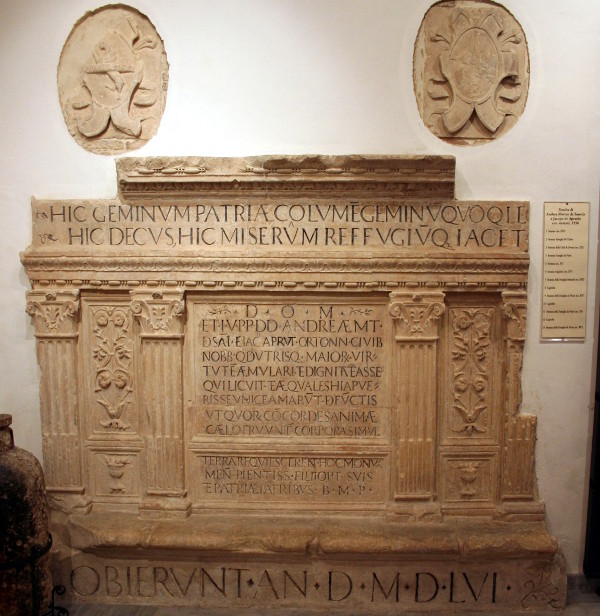 Download the audioguide
According to the historian Giovan Battista Pacichelli, De Sanctis family had its historic residence near the Cathedral on an area formerly belonged to Riccardis forced to exile after the victory of Aragoneses. The foundation of the palace can be thus dated to the 15th century even if it was certainly object of restoration interventions by Andrea Matteo De Sanctis in the first half of 16th  century as it can be read in the inscription on the stone portal and as highlighted by many architectural elements, brought back to light after some restoration works, that testify to the antiquity of the building.

Towards the end of the 16th century it hosted Margaret from Austria, natural daughter of the Emperor Charles II, duchess of Parma and Piacenza and governor of the Spanish Netherlands who decided to settle in Ortona, that she had obtained in 1582 by Horace de Lannoy Prince of Sulmona and Count of Venafro,  as guest of Camillo de Sanctis waiting for the completion of her palace, for whose construction the famous architect Giacomo della Porta had been appointed. But she died on 18th January 1586 in De Sanctis’ palace before Farnese palace was completed. 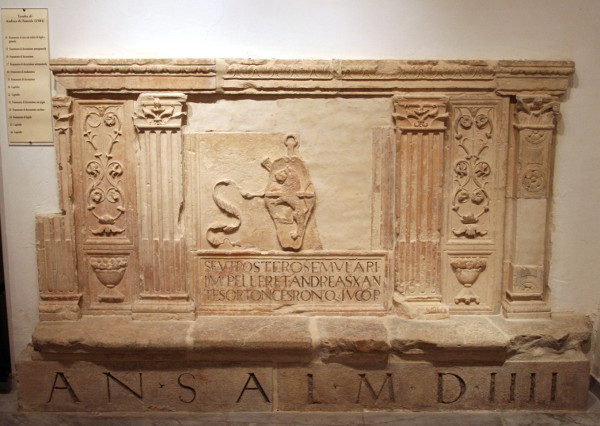 Download the audioguide
Andrea de Sanctis was Royal Treasurer of Abruzzo from 1423 to 1445. De Sanctis family from Ortona is chronicled from the 15th century but its members settled in different cities in Abruzzo giving life to the branch of Vasto, currenly extinguished and to the ones of Teramo, whose descendants are the De Sanctis of Castelbasso, of Canzano, of Penne and Orsetti de Sanctis.

Their emblem shows a lion with a bend on which it’s possible to see three P letters, interpreted as  "Pugna Pro Patria".

Tweet
More in this category: « THIRD ROOM The numismatics »